The following article, published in The Victoria Daily Times, 21 Aug 1897 was not known until Adam Palmer discovered it recently. Note, dear readers, that there is no word about gold here. Slumach's name will only be linked to Pitt Lake gold around the time of the First World War.

News has reached New Westminster, says the Columbian, of the death of old Swamka, a Pitt River Indian. He was the elder brother of the desperado Slumach, who, it will be remembered, caused the authorities so much trouble to capture in the Pitt Lake Mountains a few years ago, and who subsequently expiated his crimes on the gallows in this city.

Last week Swampka, accompanied by the old squaw of Slumach, whom Swamka had taken care of since Slumach’s demise, left for the head of Pitt River to gather mountain herbs. The old man pitched his tent and early next morning left for the mountains but he never returned, and the poor old squaw waited day after day for him. For four days she was without food, for she was cripple, blind, and unable to take care of herself, and when found by Mr. Cromarty, a timber cruiser, was at the verge of death from starvation.

Mr. Cromarty, but shortly before, happened upon the remains of Swampka, lying face downwards one the other side of the creek, that empties into the lake. The old Indian had, apparently, strove to climb the mountain side where his prized herbs grew, and had expired from exhaustion and extreme old age being ninety years old. 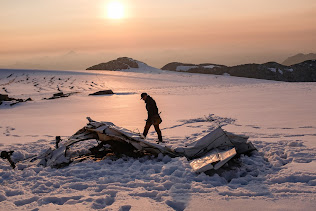 Recently Adam Palmer asked me about Marcus Cox, a prospector mentioned by Donald Waite in a story on his former website  “The Lost Gold Mine of Pitt Lake.” If you are interested to know more about this long-forgotten man and some of his claims click here. Since he was not a victim of “the curse” and did not tell fanciful stories of untold riches he never became part of the legend.

Brian Antonson zooming in on Gold

Brian Antonson will be making his usual presentation on the Slumach‘s Gold tale on ZOOM on September 30th. Click here for more information and to register.

Adam (still on the SEARCH) just returned from a great trip! He and Keith did three three days (September 3-5) traversing the alpine from Coquitlam Glacier down to Pitt Lake, via Widgeon Lake down to Widgeon Creek and out the  slough to Grant Narrows. Click here to see the pictures,