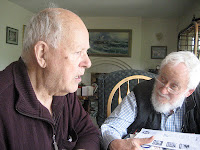 Only today did I learn about the passing of Fred Rogers on April 1st of this year. I had the pleasure meeting him in the summer of 2008 when he kindly shared with me what he knew and had collected over time about Slumach. I never would have guessed that he was approaching his 90th birthday back than. From him comes a wonderful story related to the chase for Slumach's gold. Click here to read it. To find the reports of the Province's 1952 expedition search here.  Photo: Interviewing Fred Rogers in 2008.
Posted by fb at 15:14 No comments:

The Antonsons are at it again! It will be FUN 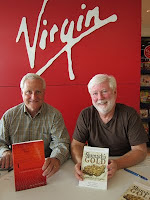 Just as last summer Rick and Brian will make a guest appearance at Virgin Books at Vancouver International Airport. You can meet and greet the brothers there on Friday, August 31st between 10:00 and 2:00. Rick will sign copies of Route 66 Still Kicks (his latest book) and To Timbuktu for a Haircut. Of course Brain and Rick will both sign your copy of their famous, bestseller Slumach's Gold. The photo shows Rick (left) and Brian at YVR last year.
Posted by fb at 16:04 No comments:

I read with interest your item in last week's Mission Record, "Nuggets from Barlee's gold pan".  You cite his coverage in Canada West Magazine of the story of the "Lost Gold Mine at Pitt Lake",
In 1970, three young, budding writers, myself, my brother Rick, and our friend Mary Trainer, read that same Canada West article.  We'd heard about the legend of Slumach and his lost mine years before, but reading the item in Canada West magazine blew fresh air onto the coals of a smouldering fire and we set about to research and write a book on the story.  We published our book in 1972, a slim 56-page volume that sold, over three editions in nine years, 10,000 copies.  With 5000 in sales being a best seller in Canada, we were thrilled.
Time moved on, careers changed, and in the middle years of the last decade, the current rights holder for that book encouraged us to produce an updated version.  We took on the challenge, and the result was 2007's 35th anniversary edition, a much larger (160 page) tome that took our original treatment and writ it large, with expanded tales of people who have been integral to the legend...and to the search for Slumachs lost mine...over the past century, along with a great deal of updated research.
That 2007 book, Slumach's Gold:  In Search of a Legend, now has sold over 9000 copies, pushing once again on the edges of being a double Canadian best seller.

And we dedicated this 2007 edition to the man whose seminal work on British Columbia history had started us on our own journey, Bill Barlee.
Here's a pic of our book.  Some copies, from the third printing, are still available in bookstores, and an online version is now on sale, as well.
Historian Fred Braches of Whonnock has two excellent sites on the Slumach legend.  One is a frequently updated blog, http://www.slumach.blogspot.ca/, and the other is a very thorough site encompassing the whole fascinating tale,
http://www.slumach.ca/.
And all of this...and much more!...exists because Bill Barlee sparked the interest of three young people in this intriguing local legend.  He had that effect on people, and left a larger-than-life imprint on our province and its citizens.