In regards to Fred Branches [sic] yeah I know of him and have talked to him by email a couple of times. It's his passion to find the truth of Slumach. He is a really nice guy. But Slumach is not the be all and end of the Lost mine saga.

The truth about Slumach is he is just one of many to find gold in those mountains and he did find gold. How much and where is the question? ... Slumach did however bring gold into New West. ... The first mention of his find was in the paper back in 1889. I believe Fred has the article on his site about the Indian coming into New West with a good showing of gold. That indian I believe is Slumach and this is where the legend starts

The newspaper article is from the Mainland Guardian of 10 November 1869 and not 1889. Yes, I agree that, until we find some earlier evidence, the story of the Indian who found gold in a little stream on the north side of Pitt Lake, is probably the first publication linking the area with gold and the start of the legends.

But why would that Indian be Slumach? Slumach only became part of the Pitt Lake gold saga in 1926. The question is not how much and where Slumach found gold. but if he found gold at all. The truth is, that there is no evidence that he found any or did "bring gold into New West." And those "many to find gold in those mountains"? Many searched for it but only a few are rumoured having found gold there.

By the way, I am equally interested in the legendary figures, such as Jackson, who probably never existed.

The 71-year-old prospector (Jack Mould) is missing after mysteriously disappearing while gathering fresh water from the Southgate River.
http://web.bcnewsgroup.com/portals-code/list.cgi?cat=23&paper=6&id=1062499
Jack Mould and the Curse of Gold, Elizabeth Hawkins and Jack Mould
ISBN: 0-88839-281-8
http://www.hancockhouse.com/products/curgol.htm
Posted by fb at 10:59 No comments:

An article titled "Stanford Corey, First to Discover Pitt Lake Glacier," by A.C (Fred) Rogers published in BC Historical News, Winter 2003, tells a story about prospector Stanford Corey, "who traveled through the trackless wilderness into the headwaters of the Pitt and Stave River country in 1899." The article quotes extensively from an interview with Corey (then 77 years of age) by Lawrence Donovan published in the Vancouver Sun of 28 August 1926.
Stanford Corey reportedly "was the first one to blaze a trail from the head of Pitt Lake to Howe Sound and Squamish in 1900 while on his own four months in the trackless wilderness." At the end of Fred Rogers's article is a mention of Slumach, but those are Rogers's words and not those published in 1926.
To read the article click BC Historical News Winter 2003 and go to page 6.
Stanford Corey was born about 1853 in New Brunswick. He died in March 1932 in Vancouver, BC.
Posted by fb at 10:10 No comments:

All newspaper and magazine articles I could find and copy to date have been transcribed and posted as pdf files. Click on Newspapers 1900s on the Slumach site.

I am sure there are more out there also from the 1800s.

I'd be grateful for references of any relevant newspaper or magazine articles that I have not listed yet. Send a message to webmaster@whonnock.ca
Posted by fb at 12:40 No comments:

In August 2000 Mike Cleven posted a message on the Chinook page. I have tried to send an e-mail to Mike asking for his approval to post part of his text, but my messages were returned. So, I’ll just assume that he would agree until he tells me that he doesn't.

Some of you may know the legend of Slumach and his legendary gold mine, and the curse he supposedly uttered just before his death. [...]

"The curse put on the mine by Slumach has been reported as "Nika memloose, mine memloose." The interpretations of this curse vary, but all centre around the idea that "when I die, mine dies" or "when I die, so does my mine." Some have tried to enlarge the translation by adding words to the effect of "and all who search for my mine will die, also." There is no reliable proof whatsoever that Slumach uttered this
or any other curse at any time. The most reliable reports say that he went to his death without saying a word." [...]

But for the hell of it, why doncha'all try and come up with yer own phraseologies for what might have followed "nika memloose, mine memloose........."

[Unfortunately “the group” did not take up the challenge]
Posted by fb at 20:42 No comments: 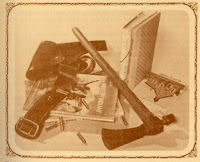 Gerry Armstrong, great-grandson of Dr. Richard Irving Bentley, kindly reported that “Slumach’s tomahawk” is still in his possession. He remembers the smoking pleasures it gave him and his siblings as kids, and told about its recent failure (in the hands of a burglar) to break a lock in his house. Smoking? Yes, this a pipe tomahawk.

It is said that this tomahawk had been taken from Slumach’s possessions after his death by Dr. Bentley and, as Gerry Armstrong was told, that Dr. Bentley was the physician who pronounced Slumach dead. But the official records don’t show Dr. Bentley’s presence at Slumach’s hanging, at least not in an official capacity. It was a Dr. Isaac M. McLean who certified Slumach’s death.

The picture of the tomahawk shown here appears in most of the Slumach stories of Antonson et al and most recently also in The Province of 2 September 2007. The corresponding text suggests that it was “of the type traded by the Hudson’s Bay Company in the 1880s.”

I doubt that the HBC ever called their axes tomahawks and I can't imagine (please prove me wrong) that pipe-tomahawks were sold over the counter at Fort Langley at any time. “Pipe-hawks,” ceremonial tomahawks, presentation tomahawks and fighting tomahawks have their place in the cultures of the US Northern Plains and the countries “back east,” but seem so foreign to our Native traditional culture.

It seems so improbable that one would have been in Slumach’s hands and in his days hiding from arrest he would have carried a true axe, if he even carried one at all. Dr. Bentley’s tomahawk may therefore have an entirely different tale to tell than what was told in the family.

An axe turns up twice in the Slumach story, but it was not Slumach’s axe. Charlie Seymour, the sole witness of the murder committed by Slumach, saw an axe at Slumach’s camp that he recognized as the victim's, Louis Bee. The second mention of an axe is by Amanda Charnley who remembered having been told that Bee went after Slumach with an axe--that Slumach acted in self defence, but that is not what happened.

Illustration from Slumach's Gold, In Search of a Legend by Rick Antonson et al, 1972
Posted by fb at 16:57 No comments: