Some reporters have suggested that Slumach fashioned bullets out of gold and that he used these bullets for hunting and target practice. In 1931, Jason Allard (letter to McKelvie in Langley Centennial Museum holdings) told the story that "when gold was discovered in the Queen Charlottes" [1851] "gold was so plentiful that the Indians melted the gold and made bullets of the gold." It seems that this old tale was recycled at a different time and place. Lead bullets are quite easily made. Lead that has a melting point of 327°C (621°F). To fashion bullets out of gold requires more than a campfire. Gold melts at 1062°C (1943°F).
Posted by fb at 16:16 No comments: 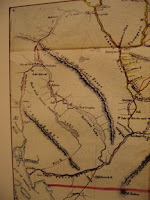 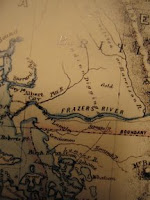 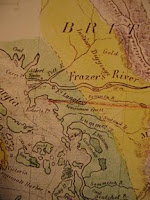 Remember the news item in the Mainland Guardian of 1869 titled "Discovery of Diggings at Pitt River" that created considerable excitement in New Westminster? Click here to read it again.
A decade earlier, in 1858. the Fraser gold rush started and in that year a number of maps were drawn promoting the gold fields. Derek Hayes shows three of those on pp 151-154 of his Historical Atlas of BC and the Pacific Northwest.
The pictures I show here are details of these maps of the area around Pitt Lake area mentioning "gold" and "Indian diggings," and one map, in the extension of Pitt Lake the words "much gold bearing quartz rock." The maps must have triggered the stories of gold beyond Pitt Lake that have returned to the newspapers ever since. Click on the images to zoom in.
Posted by fb at 19:17 No comments:

"Volcanic" or "Sunset" or "Crazy" Brown

Some background information from The Virtual Crowsnest Highway about treasure hunter R.A. Brown, one of the real--not imaginary--persons in the saga of the Lost Creek Mine.

[In 1885, near Grand Forks] Brown staked his Volcanic and Fontentine claims on pyrrhotites and pyrites carrying significant gold, silver and copper values. He was soon convinced that a mother lode of gold-rich chalcopyrite lay within the claim, and his optimism for the properties soon attracted other treasure-hunters. Nearby, around what was dubbed Brown’s Camp, other claims including the Pathfinder, G.W. House’s Black Tail, Hummingbird, and Golden Eagle, were staked.

So enthusiastically did Brown expound upon the thousands of tons of pure copper ore and gold and silver that he knew were just beyond the end of his current tunnel, and so wild were his prognostications that the riches within reach would fuel a benevolent economic Goliath that would summon a half-dozen railroads and shelter its workers in Utopian settlements where all the churches would be “halls of science,” that he soon became known to some as “Volcanic” Brown, to others, “Crazy.” Despite his best promotional efforts, however, Brown failed to attract much investment, and in 1897 leased the Volcanic to the Olive Mining and Smelting Company while he went off hunting for his next bonanza.

By January of 1904 the Michigan-backed Volcanic Mining Company had purchased the property, renaming it the Volcano in an attempt, perhaps, to try and disassociate it from Brown. When told the next year that the tunnel was in 800 feet and still no lode had been located, Brown assured his interviewer that the “real thing” was just beyond the end of the tunnel. There it remains, for even Brown himself, who returned to the abandoned property towards the end of the Great War, could never push the tunnel far enough to hit pay.

An article in the Columbian of 14 March 1963 titled "Lost Pitt Lake Mine--Fortune Still elusive" tells a legend about an old and dying water serpent guarding a cave, mostly hidden by the water, where "deeper within" there "were many shiny pebbles."

On the microfilm print the author of the article can hardly be read. It is something like Brian Makken or Makers. Is anyone out there familiar with this gentleman? Was he the author of this "legend" or did he repeat what he read or heard somewhere else?

I doubt that it is a Native legend. Gold played no role in traditional First Nations culture in the Northwest corner of the Americas before contact. (Note 23 November 2007: I quote from a letter written in 1931 by Jason Allard to Bruce A. McKelvie mentioning first gold finds in BC : "....in the year 1857, what did an Indian know about gold at the time?" Letter in holdings of Langley Centennial Museum).

For another gold/serpent story read The Sea Serpent (E Pauline Johnson-Tekahionwake, 1911)
Posted by fb at 15:23 No comments:

On page 47 of Slumach’s Gold, in search of a legend (2007) the authors suggest that Sheridan Hill was in the early days called Menzies Island. The source of that information is a 1961 article in the British Columbian by journalist Syd Orpwood. He refers to “A yellowing old topographic chart of the Pitt River area…made from surveys undertaken in 1875, [that] shows the large rocky outcropping was at that time known as Menzies Island.”

The year of 1875 and the words "yellowing" and "old" are misleading. Survey charts always show the dates of previous surveys and this is clearly a recent chart.
This should put the misnomer to bed. "Sheridan Hills" (plural) is the name shown on the maps made by Captain George Richards and the officers by H.M.'s surveying ship "Plumper" in 1859-1860.

The origin of the misunderstanding? In 1900 Henry William Menzies, who worked for the CPR purchased land on Sheridan Hill, to raise his family there. It came to be referred to as "Menzies Mountain."
Posted by fb at 13:58 No comments:

Click here to read a poem celebrating the dedication of the Peace Arch in 1921, written by Victor Harbord Harbord under the pseudonym Justin Wilson. What has that to do with Slumach? Victor Harbord Harbord was the journalist who, in 1926, interviewed Jason Allard mentioning gold in connection with Slumach for the first time. (Click here for a transcript of the article.) It would be interesting to see if he has written before about "Slumach's gold." The following note from the Peace Arch pages shows that he did not only write for The Province:

The poet’s granddaughter, Lynda Daddona, lives in Burnaby. “His occupation was as a writer and he was the Fraser Valley correspondent for the Vancouver World newspaper, which merged into the Vancouver Sun,” [in 1924] she said. “Victor Harbord Harbord wrote his newspaper articles under his own name, but his poetry was written and often published under the pen name Justin Wilson.

Victor was born in Ireland in 1872, was raised in Bath, England and spent much of his adult life managing a tea plantation in Ceylon and in New Guinea. He died in New Westminster in 1943.”

The Province of 8 August 1926 includes an interview with Jason Allard, who, claimed the Province reporter Victor Harbord Harbord, "knows all there is to be known of Fraser Valley Indians." Jason Allard, (almost 80) told him a Gothic tale about "Slough Moug" and his brother "S'Mamqua," originally from Nanaimo, who settled at Stave Lake "and murdered everyone that ventured into their territory."

The account refers to an article by a Mr. S.A. Fletcher that I found in The Province of 27 June 1926. Click here for a transcript. Fletcher reminisced about his early years fishing and hunting at Pitt Lake, "long before the gas engine was thought of," and told the story of his encounters with old Chief Swampkwa and the widow of his brother Shloomack. [A 1878 census (see May postings) shows the spelling of the name of the chief as Tsa mem.kwah.]

Old Chief Swamkwa, who saw his people diminish around him, "did not like the white man: he had been cheated and abused by them," but there is no reference to Slumach's end in this account and nothing that would hint at a violent reputation of this old gentleman or his brother Shloomack. Nor is there any reference to gold in Fletcher's story.

It still looks as if Jason Allard's phantasmagorical story is the first where Slumach is connected with the gold in Pitt Lake country.

S. A. Fletcher may have been Sidney Ash Fletcher, who died in December 1934, 78 years of age, at New Westminster. A Sidney Ashe [sic] Fletcher appears from 1903 until 1911 as collector for the Provincial voters list for Delta, Dewdney and Richmond and New Westminster city.
Posted by fb at 09:34 No comments:

Twelve O'clock Sharp was written and published by Michael Eisele in 2006. "This book contains fifteen stories written in a literary style, which never lack suspense, nor a whiff of mystery."

In one of the stories in the book called "A Lesson," Slumach appears at his hanging in New Westminster. Peter Slumach, his nephew, becomes the inheritor of the secret mine and is the one "walking the streets of New Westminster with bulging pockets, seldom sober, always boisterous." The story leads on to the Thompson area. "Slumach's fabulous mine, originally said to be located in the Pitt Lake distrct, somehow managed to relocate to an area north of Ashcroft, between Deadman and Bonaparte River; home of rattling snakes, howling coyotes, and screaming eagles."

Click here for more of the story and enjoy.
Posted by fb at 11:08 No comments:

On 24 May, I posted on this blog that, at the time of Slumach's trial, Bee was described "as in the habit of blustering at and threatening everyone with whom he came in contact," and it was said, that there was "bad blood between Slumach and Bee." But there are no particulars about that "bad blood" and what really caused Slumach to shoot Bee may remain unknown.

That has not stopped some to present their own theories.

In their video "Seekers of Gold" (see post of October 23) Friesen and Nicholson suggest that Bee and Slumach "fought for the gold." Something similar was proposed in articles in The Columbian of June 1961 by Elmer McLellan, Columbian's City Editor. McLellan suggested that Bee got shot because he came too close to Slumach's gold cache that McLellan thought to be at Sheridan Hill. Of course, without evidence that Slumach had anything to do with gold, both ideas are just that: ideas.

In 1988, Jim Christy had a different idea. He suggested that "Slumach hadn't killed Bee because the man was on his trail, no, Bee was attempting, albeit too late, to defend the honour of his niece." That would surely explain the "bad blood" between Slumach and Bee, but the court records show that Slumach did not act in self-defence. He was not threatened or attacked by Bee.

Click here to read a transcript of Christy's article "Slumach's Gold," published in BC Outdoors January/February 1988.
Posted by fb at 20:57 No comments: