In an article published in the Province of 8 August 1926, journalist Victor Harbord Harbord claimed that Jason Allard was "Slumach's jailer." Legal records of preliminary hearings of the Slumach case of 3 November 1890 (transcripts in Don Waite's collection) show that Jason Allard was the interpeter at that specific hearing and not Slumach's jailer.
Posted by fb at 12:10 No comments: 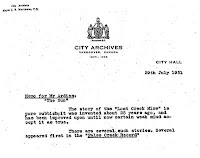 One of the surprises in Don Waite’s recovered collection of Pitt Lake papers is a note written on 29th July 1951 by City Archivist Major J.S Matthews to Vancouver Sun journalist Tom Ardies. The note reads:

The story of the "Lost Creek Mine" is pure rubbish; it was invented about 25 years ago, and has been improved upon until now. Certain weak mind[s] accept it as true.
There are several such stories. Several appeared first in the False Creek Record.

Click on the picture for an enlargement of the note.
Major Matthews’s notes at the City of Vancouver Archives reveal that the False Creek Record never existed and that articles claimed to have been taken from this phantom publication appeared in the Province, between approximately 1900 and 1910, and not in the 1920s. Clearly I must spend some time perusing the Province to look for the “several” Lost Creek gold stories Major Matthews refers to.
Posted by fb at 12:00 No comments:

Writings about Pitt Lake gold always mention a letter allegedly written by a dying American prospector named Jackson, who, so the story goes, found the treasure, but for health reasons was not able to return to harvest the remainder of “untold riches.”

All publications cite only part of the letter perhaps because the journalist and authors had no access to a copy of the entire text or because the owner was reluctant to share the content in full. Among the few who by their saying had a copy of the letter were Hugh Murray in New Westminster (interviewed in 1939) and Vancouver man named Cyril Walters, a sign-painter (mentioned in newspapers in 1950). Both these copies have disappeared.

Imagine my pleasure to discover the existence of a transcript of one of the copies. This transcript was made by Arthur Wellesley (Dick) Carter, neon-sign maker, probably around 1940 and there are reasons to believe that it was transcribed from Murray’s copy. But there is also a connection with Cyril Walter, the other owner of a copy. Carter and Walter were both signwriters. It is believed that they worked together for a short time and remained friends. On at least one occasion Dick Carter joined Cyril Walter on his yearly trek to the Pitt Lake mountains.

Today, Richard James (Jim) Carter of West Vancouver is the custodian of the Pitt Lake papers of his father and he generously allowed me to copy the transcript of the Jackson letter his father made and to share the full text of this unique document on the Web site.

That will happen soon.

The grave records of St. Peters' Roman Catholic Church suggest that Father Morgan gave the Christian name "Peter" to Slumach at his baptism, It is a given name he would have shared with his spiritual guide, catechist Peter Pierre.
Writers about the legendary gold of Pitt Lake sometimes invented a non-Native first name for him, but the only and complete name the man himself and those around him knew during his life time was just "Slumach."
A request for a transcript of the register of Slumach's baptism went out recently to the archivist of the Roman Catholic Archdiocese of Vancouver to confirm that he indeed was given the name "Peter."
Posted by fb at 14:22 No comments:

Amanda Charnley, daughter of Peter Pierre, Slumach's spiritual helper in prison, told Don Waite in 1971 that Slumach was buried in an unmarked grave in Sapperton.

To Archie Miller and Dale Miller (A Sense of History Research Services) goes the honour of having rediscovered Slumach’s grave. They found undisputable evidence that Slumach was buried at St. Peter’s Catholic Church Cemetery in Sapperton and where he was buried there.

The Millers became aware of this information as they were collecting background information for two New Westminster cemetery books they are working on.

Archie and Dale Miller are also preparing new cemetery tours on the theme “murder, mayhem, etc,” including a visit to Slumach’s unmarked grave and a “long list of folks with connections with Slumach.”

Click here to read the "Lost and found in cemeteries" column in the 29 November issue of the New Westminster Record where the Millers published their finding of information about Slumach's grave.
Posted by fb at 13:11 No comments: 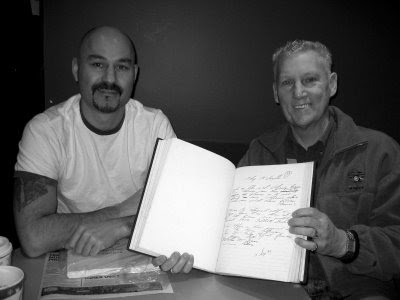 In September 2001, Donald E. Waite made a trip to the top end of Pitt Lake to enjoy a "golden moment" in the hot springs at Second Canyon with his two sons, Kevin and Nathan and his old friend Victor Loffler. He took with him a bound volume with documents he had compiled over the years about Slumach's Lost Mine of Pitt Lake. Back home, when he needed the book he could not find it anymore. He was convinced that it was lost on that Pitt Lake trip, the latest victim of Slumach's curse!
Imagine Don's surprise when at a recent signing session of his book Maple Ridge & Pitt Meadows: A History in Photographs someone came up to him with in his hands the volume he thought lost forever.
Greg Henderson found the book as part of the content of an abandonded storage locker he had purchased. He could have offered it for sale on e-Bay, but recognizing its value to the collector of the documents, he generously decided to return the book to Don instead, not wanting more for himself than a photocopy of this 200-plus page book.
The photo shows Greg (left) and Don Waite (with the book in his hands). The book contains some wonderful surprises that will be made available on the Web site in the coming weeks.
How did the book end up in the locker? Ask Don next time you see him!
Posted by fb at 16:41 No comments:

A few minutes before 7 o’clock Father Morgan baptized Slumach, who professed his belief in Christianity, and the hope of salvation. (Columbian, 16 January 1891)

William entered the novitiate at Belmont House, Ireland, on January 21, 1886, and made profession on March 19, 1887. He left for British Columbia, took his perpetual vows in New Westminster on April 25, 1888, and was ordained priest there on May 5, 1889, by Mgr. Louis D'herbomez, Vicar Apostolic of British Columbia.