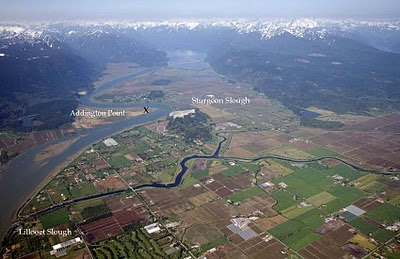 Following is a summary of the witness statements at the Inquisition, Disposition and Assizes, all of which can be found on the Web site under "Legal Records" and "Transcripts from Legal records."
Seymour went in a canoe with Louie Bee from Lillooet Slough, the place where they were living since the end of the fishing season on Pitt River, to look at their sturgeon lines. They went from Lillooet Slough up about two miles, and finding the lines there without bait, they went a bit further along the shore to look for some dead salmon. Then they heard the rapport of a gun on the opposite (west) shore that is on the left hand side going upstream, and Louie Bee proposed to go across the river—about a quarter mile. Slumach appeared at “about the elbow of slough.” Note that Seymour calls Pitt River a “slough."
After the murder Seymour walked downriver and across the railway bridge to his camp.
Measured from Alouette River, approximately two miles would have taken Seymour and Bee right to where Sheridan Hill is, and going up a short distance more they would have heard Slumach’s gunshot coming from Addington Point across at the elbow of Pitt River.
Said Aunt Mandy to Mike Collier in 1978:  “You know where Sturgeon Slough is? This point on the west side of Sturgeon Slough across the Pitt River, the corner before you turn north to the quarry, that’s where it happened, just a little west of the corner.”
Posted by fb at 09:48 No comments:

Daryl Friesen, who as always is looking for treasure, made a video titled The Wandering Prospector that brings back the warm days of summer rather than the icy glaciers. There is mystery out there and Daryl gives us that feeling throughout this production. Have a look by clicking HERE
Posted by fb at 14:29 No comments:

From Rob Nicholson this little piece in the Report of the Minister of Mines, 1933 in Victoria. Click on the picture to enlarge. Pitt River country and Fire Mountain: perhaps there were two discoveries, the Slumach/Jackson (Pitt River)  find and the Brown & Brown (Fire Mountain) find. Ahhh, sweet dreams. Thanks Rob.