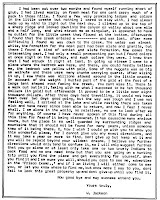 In 1977, N.L (Bill Barlee) published a facsimile of a transcript of part of the “Jackson” letter. (click image to see the full page).
I've tried to find out where the original "authenticated oldest" copy of the “Jackson letter” from which this transcript was made would be today. An unexpected answer came from the transcript of a recorded telephone conversation between Barlee and Daryl Friesen quoted as follows in Friesen's Spindle Quest
-- Well the reason I am calling you is because you were the first person to ever publish a story which contained the Jackson letter. I was kind of wondering where you got it from.
-- Volcanic Brown gave it to my father.
-- Really, the old prospector who died on Stave Glacier?
-- That’s right, my father showed it to me when I was 20 and I made a copy.
-- Where is the letter now?
-- My father sold it to a collector, some rich American I believe.

That is a surprising answer from a collector of everything to do with the past. I am inclined to read in this that there never was a “Jackson letter” attributed to Volcanic Brown in the Barlee household or that an anonymous "rich American" to buy that letter ever existed.
Posted by fb at 21:22 No comments: