Go here to read more about the hairy humanoid!

The first mention of Jackson (given name Walter) was by Wilbur Armstrong in 1915. The receiver of the letter was given as Andrew Hall. Armstrong was close to the creator of the Jackson letter and probably the author of the letter.
In 1925, Purkins revived the story--obviously still circulating among prospectors--using the name Shotwell for the author of the letter and the discoverer of the bonanza.
Not until 1939 did the story find it's way to the press again, this time with the name Jackson as the letter writer and the discover of the gold. His full name was now John Jackson rather than Walter Jackson. Shotwell (and some others) became the recipient of the letter and did or did not follow up on it, reportedly none with any success.
In 1973 Charles Miller introduced a man called Harrington to the legend as a companion to Shotwell. Coming out of the mountains they turned up at Ruskin in 1911 with a pouch of gold nuggets. The men proceeded to Seatlle where Shotwell died shortly after his arrival in the usual tradition of the legend.

Note: This Harrington not to be confused with Cog Harrington of Boston Bar who was born in 1913. Warning: There is no historical evidence that Jackson, Shotwell, Harrington, Hall, and any other players in the Jackson story ever existed. Believe at your own risk.
Posted by fb at 08:21 No comments:

Report on Adam's and Evan's famous walk about

Adam's report on the legendary Harrison-Pitt trip is out. Click here to read and see it all.
Posted by fb at 11:34 No comments:

A great video from Daryl Friesen. Click here.
Posted by fb at 11:26 No comments:

Just a note to say that Adam and I got out from the trip yesterday and our two partners who turned back also got of safely on the 12th as planned. We are just starting to sort through the videos and pictures.
Evan
Posted by fb at 12:36 No comments:

Is the sasquatch out there? 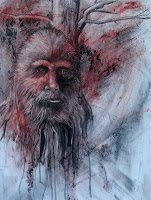 Reports about the sasquatch seem to go hand in hand with the quest for Pitt Lake gold. Click here to read an interesting story in The News (Maple Ridge) of today: an interview of Jason Ericson, a member of the Big Foot Field Research Organization. The illustration is by Arlet deVisser.

I had the pleasure of meeting William Cull at the Witch of Endor pub back in 1991 when I first really started tracking people down who had searched for the mine. He was very hesitant to share the location of the tent-shaped rock but I managed to get the general area. He was also the inspiration for something I wrote called "the prospectors philosophy." It's below as well as the line he said in our conversation that inspired this. Anyway, since he has passed away, I thought maybe someone would find this interesting.

You see, we prospectors are a dying breed. The world doesn't function around us anymore like it used to back in the gold rush days. The people who care for you can't understand. What in the world would make you want to risk your life to look for gold? They don’t understand the dream, but in the old days everybody understood.
You didn’t have to worry about your wife leaving you or your friends scorning you because you wanted to find the gold. Everyone was doing it. Everyone dreamed of the day when they would be the one to strike it rich. For all it represented freedom, but what does it mean to people today? I’ll tell you, a big house and a nice car. People don’t see that prospecting is so much more than just finding the golden score. It’s not seen as a building block for freedom. It’s been twisted and messed up to the point of being stuck on a scratch-and-win ticket.That is what is left of the prospector’s dream in today’s world. All the people around you don’t understand, they can’t see the freedom and the hope it brings you when you chase the dream. They just think you’re dreaming, but we know the truth, don’t we? .

"The truth is: you’re living and they are the ones that are dreaming. Their search for the big car and the nice house. Ha! Illusions I tell you, brought onto their brainless minds by a media machine. How I wish I could chase after it still, but the fight’s over for me, lad. I’ve got a bad ticker, you see."

THE LINE ABOVE WAS SAID BY BILL CULL.WORD FOR WORD.
Posted by fb at 07:10 No comments: 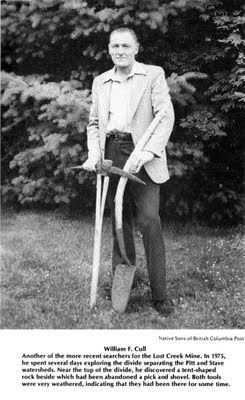 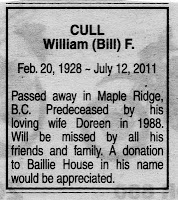 Don Waite alerted us to this small obit in the Maple Ridge/Pitt Meadows. Another early Pitt Lake Gold searcher gone. In his book The Fraser Valley Story Don wrote in 1988:


"…William F. Cull, a mailman from New Westminster, contacted me about the lost mine. He stated that he had become intrigued with the legend in the late 1950s from reading newspaper clippings and, as a result, had made several trips by helicopter into the remote wilderness. On one trip, Cull spent 10-12 days exploring and discovered a very weathered pick and shovel hidden in the crevice at the base of a tent-shaped rock, near the top of the divide between Pitt and Stave watersheds. Clearly visible on this rock was the letter ‘J.’ Cull concluded that the letter had been carved with the pick left by the original owner of the tools. Unfortunately, he had gone too early in the year and there was still ice on the creeks and several feet of snow on the higher elevations. Cull told me that he planned to charter a helicopter to go in again once the snow melted; he invited me along for the trip. In June 1975, my father and I were deposited beside the tent-shaped rock. Unfortunately the snow was still too deep and we found nothing. " 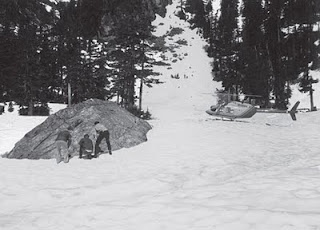 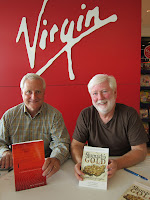 The Antonsons were hard at work this Friday from 10:00 to 2:00 at Virgin Books at YVR selling and signing their bestselling Slumach's Gold (more than 8,500 copis sold!) and Rick's fabulous book To Timbuktu for a Haircut.
Click here to see more pictures!
Posted by fb at 21:53 No comments:

From a poem by Peter Trower

Daryl and I went in with Adam, Evan and his two friends today to Fire lake. Never realized what a long drive that is--almost four hours and over 200k each way. We have some great shots and moments already, so the blog will have some action in two weeks or so. It was an amazing day to sit overlooking Fire mountain and Fire lake and have the Terrarosa in the back ground. We will keep you posted when we hear news.
Greg
Posted by fb at 07:30 No comments:

War on Terra! Going in and bringing it out!

Yes, it was a great evening, and a big thanks to Don and Tina for having us over...thats what this is all about, bringing everyone together, and sharing in the journey...Myself and Evan are lucky to have everyones support and help in research, and our trip that we take across the glaciers is all for everyone involved in this mystery, you may not be with us on the climb, but we bring you with us through all mountains and glaciers in our hearts and minds! Thanks!
Adam
Posted by fb at 10:58 No comments: