Roger and Marlene Manson of Burnaby have in their possession a stock certificate of the Slumach Lost Creek Mine Ltd. made out in the name of Roger's father, George Matusek (who later changed his name to Manson). The certificate is dated 18 September 1952. They kindly permitted me to scan the certificate and publish it on the Web site. Click here to look at it.
Posted by fb at 09:11 No comments: 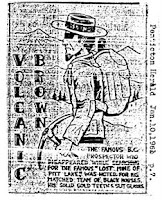 "Volcanic Brown, the famous BC Prospector who disappeared while seeking for the famous 'Lost Mine of Pitt Lake,' was noted for his matched team of black horses, his solid gold teeth and slit glasses." .... and those solid gold teeth ended up in that glas jar, eh?
Province 10 April 1952: "Volcanic" Brown is stated to have disposed of his interest [in Copper Mountain] for $45,000. He celebrated the event by visiting a dentist and ordering a set of gold teeth.
Posted by fb at 15:47 No comments:

From the Weekly British Columbian, summer 1889

Mr. John Murray has a large flock of ducks which feed in the water at the extreme head of the [Burrard] Inlet, and a stream and at the mouth of a stream that empties into the salt water at this point. One of the ducks was killed on Tuesday for table use and on opening the crop Mrs. Murray was astonished to find a handsome gold nugget, which, when weighed, indicated a value of $1.25. Much speculation was the result of the find and many where the opinions and theories expressed by old miners on the subject. The result of the discovery is that several claims on the creek and at the head of the inlet have already been staked, and immediate steps will be taken to test their richness.

At Slumach's trial on 14/15 November 1890 one of the witnesses for the defence is a man called "Moody." Generally it is thought that this witness was George Moody, the son of a Native woman and Sewell Prescott Moody, the lumber exporter of Moodyville, now North Vancouver.

The Daily Columbian of 14 November 1890 refers to this witness as "Moody, an Indian." Was this witness George Moody or was it someone else.

Going through the 1889 Police Court reports I came a few times across an Indian called Moody, a repeat offender hanging around in New Westminster for most of 1889. The following clipping, the last in 1889 showing his name, mentions that he is from the reserve in Harrison. That would link him to Seymour (who was the only witness to the murder of Louis Bee). Was this perhaps the Moody mentioned in the court records as a witness for the defence? And if he was not George Moody, who is this man?

Police Court (before T.C. Atkinson, P.M. and P. McTiernan, J.P.)
Moody, the chief of all vagabond Indians, graced the dock again this morning with his ugly countenance on charge of being drunk. Last July Moody was ordered by the court to return to his rancherie [reserve] on the Harrison River, there to remain three months in quiet seclusion as a sort of penance for his all round wickedness. As was expected, Moody failed to keep his promise, and although he got drunk repeatedly in a quiet sort of way, it was not till yesterday that the police caught him napping. When asked if he was guilty of the charge, Moody seemed grieved that the court should put such a useless question and replied “Of course I was drunk.” Fined $5.00.

Unfortunately I have to go back and find the exact date.
Posted by fb at 11:40 No comments:

Slumach became part of the Pitt Lake gold legend in 1939 in an article written by Jack Mahony who interviewed pioneer Hugh Murray. The "Slummock" in their story was a middle-aged “half-breed Red River Indian” who was hanged for murdering another half-breed prospector by drowning. This "romantic fiction” included the first published text of the probably equally fictional "Jackson letter." Thanks to Barry Dykes, archivist at the New Westminster Museum, I had an opportunity to go through this large volume at my leisure. A very interesting collection of cuttings, but there was nothing about Pitt Lake Gold there. If Hugh Murray did collect cuttings about the discoverers of the Lost Creek, he must have kept them somewhere else. Shown are some pages of the scrap book. Click on the images for enlargements. 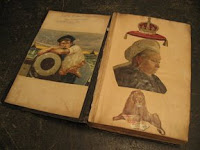 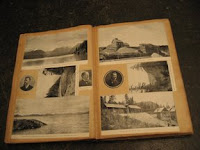 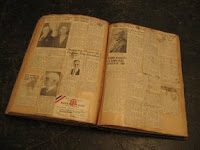 The Trail of 1858 is a great book by Mark Fortsyth and Greg Dickson (CBC Radio's "BC Almanac") published in 2007 by Harbour Publishing. It starts at BC's Gold Rush of 1858 and continues into the very recent past. Very highly recommended.

The Trail of 1858 is No. 1 on the Best of BC list of the Association of Book Publishers of BC. (Slumach's Gold is climbed up from the eighth spot the held for a long time to the fifth position this week!)

Slumach is mentioned (p 148) with a reference to the Antonsons/Trainer book. Forsyth and Dickinson conclude that the legend is just a legend and suggest that "where the connection [with Slumach] came from is still unknown, despite decades of research." My little piece "Pitt Lake Gold" in Wikipedia offers an approach to an answer to that question.
Posted by fb at 15:58 No comments: 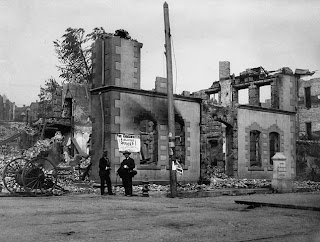 STILL MISSING are the records of preliminary hearings of the Slumach case held at the District (County) Court 3 November 1890 before Justice of the Peace Capt. Pittendrigh. Assumed lost in New Westminster's Great Fire of 1898. We know that the content of the vault in the New Westminster court house was partly destroyed during the fire. But if the records did survive can anyone help me finding them?
Photo: New Westminster Post Office after the fire.
NOTE: Slumach's Gold, page 38, the caption of a picture of New Westminster after the fire includes the words "Many records were destroyed in this fire, including Captain Pittendrigh's...."
Posted by fb at 18:10 No comments:

In September, The Campbell River Mirror reported the disappearance of 71-year-old prospector Jack Mould while gathering fresh water from the Southgate River. A source close to the investigation tells that when the search started his dog was still waiting for him and that Jack's gun was leaning against the car, but he was gone and could not be found. Jack could have encountered a wild animal, but it seems more likely that he fell into the deep, ice-cold, glacier-fed river and drowned.

In the introduction to her book Jack Mould and the Curse of Gold, Elizabeth Hawkins writes: "But the ending, when it comes, promises to be as mysterious and intriguing as the beginning."
Posted by fb at 21:27 No comments:

Some thoughts about the "Jackson Letter"

In his story "The Lost Mine of Pitt Lake," published first in Canada West Magazine in 1970 and after that in his book Historic Treasures and Lost Mines in 1977,reprinted in 1993 as Lost Mines and Historic Treasures , N.L. "Bill" Barlee shows a fragment of a letter attributed to "Volcanic" Brown dated May 28, 1924 and the text of an enclosure, a copy of a letter alleged to have been written by "Jackson," a main player in the legend of Pitt Lake gold.

Barlee shared the content of the Jackson letter in his article, not in the form of a reproduction but as a retyped version (verbatim we are told) of "Volcanic" Brown's copy. Thus we have to take Barlee's word as to its authenticity. We are also missing the benifit of "Volcanic" Brown's own words in the 28 May 1924 letter about provenance or authenticity of the precious relic, since the content of Brown's letter is not disclosed.

In 1925 the press mentioned the "Jackson letter" for the first time, but it is a prospector called Stockwell, and not one called Jackson, who was said to have written it. Jackson only steps in the limelight in 1939 and content of his letter quoted at that time was based on a copy said to be in the hands of pioneer Hugh Murray. Variations of this version are quoted in articles published in 1947 and 1951. Those texts are very humble affairs compared with the version Barlee started to present in 1970.

Note that others before Barlee presented their version as a part of the letter written by Jackson. Their versions start with the sentence "After reaching the headwaters of Pitt Lake, I discharged my two native guides and set out into the mountains." Barlee choose to present his version as a whole, omitting that first sentence.

Wouldn't it be great to see a true early a copy of any version of the legendary "Jackson Letter"? Yes, but I doubt that anyone has or ever had one and I am not going to look for it.

A prelude to "Jackson" -- First, in 1905, an newspaper item appeared about an Indian on a pony, coming to New Westminster three times exchanging gold dust for money. As is standard in this story he became ill due to the harsh conditions in the mountains and on his death bed he told his story to a relative, who involved a white man etc. In a 1906 article a man called Frazier told about an unnamed "old man" "who was ere this been gathered in his rest," who had recovered $8000 in gold nuggets, which he had hidden under a rock. Shotwell took his place in the legend in 1925. Etc.
Posted by fb at 14:12 No comments:

Yesterday, at a presentation by Brian Antonson in Mission, Sharon Syrette wondered what the weight would have been of the legendary $8,000 in gold that Jackson was said to have taken out.

There was no one who could figure that out then and there, but, aided by the Internet here is an answer--he would have carried about 12 kgs or 26 pounds in pure gold.

The Daily Columbian of 11 September 1890 mentions in connection with the Coroners Inquest on the body of Louis Bee that: "Charlie Seymour, an Indian, was the principal witness examined by the jury." Seymour's first name is not mentioned in the legal records as the Indian from Harisson.
Posted by fb at 19:30 No comments:

Some joker wanted to add to Pitt Lake Gold item on Wikipedia the following (merciful deleted)note:

In January 2008 British explorer Nathan G Clarke claimed to be in possesion of a map wherein the exact location of the gold is revealed. The map had been in the archive vaults of the Romford International Museum. Plans to investigate the sites shown on the map are due for May 2008.


Nathan G Clarke, probably the creator of this nonsense, is a 24 year-old resident of Sydney, NSW. This "British explorer" visited Vancouver BC in 2006 on what seems to be his first trip outside his native Australia. There is of course no Romford International Museum.
Posted by fb at 15:14 No comments:

The microfilm of the Daily Columbian with the issues for the second half of 1890 is now available at the New Westminster Public Library. Click here to read transcript of the Slumach original articles of 1890 and 1891.
Posted by fb at 20:40 No comments: