GOLD...just gotta find traces and then look for the holes. 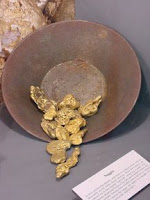 Perhaps you missed the following correspondence? Left out are the parts discussing the legal ways to find gold. Click here to go to the original entries.

flipper 01-18-2007 Been wanting to get a pan and some time. Whats the licence for, is ilegal to find gold? What would the value be of the piece on the dime? I would imagine a lot of creeks would carry gold, just gotta find traces and then look for the holes.

BrentG 01-18-2007 apparently there is supposed to be a "gold valley" up behind pitt lake Slumachs mine, should pan upper pit river and see what comes up. I noticed a claim plot tag at the entrance to six foot under when I was there.

flipper 01-18-2007 there were some interesting stories I've heard from some old guys about.

cookie 01-22-2007 yup good old slumac stories. pitt meadows city hall has a book on all that ado back in the day, pretty interesting stuff too. my old man brought it home a few years back and i had a chance to read it. it tells everything bout the area incliuding all the companies tryin to dyke the land and whatnot.theres even a story bout a farmer who plowed his field one year only to find a sturgeon living in the mud after years of being dyked that was pretty neat.

flipper 01-22-2007 Don't know but I still wouldn't mind looking up there. A prospector named Volcanic Brown made a few trips out behind pitt. always bringing back gold then was found frozen in the ice fields on his return with a sack of nuggets (not chicken).

BeerBaron Sr. 01-22-2007 the Pitt Lake gold stories are just stories,the Gold Commisoners knew this in the 1800's when Slumack was turning in his "gold find",he was actualy ambushing miners returning from the gold fields in Barkerville.

flipper 01-26-2007 Well you cant belive every thing you read but thats what it said in the book I read that was called Kwant stan or something like that.
Posted by fb at 11:32 No comments: 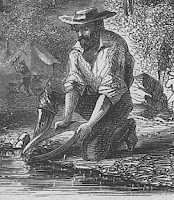 The May/June 2008 edition of Gold Prospectors has a wonderful review of Slumach's Gold introducing the book to new readers in the US and Canada. The magazine can found on many newsstands--I found mine at Save-on-Foods.

Gold Prospectors & Treasure Hunters in the Great Outdoors is a bi-monthly publication of the Gold Prospectors Association of America. Their Web site is www.goldprospectors.org
Posted by fb at 19:58 No comments:

Anyone knows a Slumach song?

"Someone" has heard a CBC program, live from the Commodore Ballroom one evening, and they'd had a Celtic music bit where they sang a song about Slumach's gold and Louis Bee! Been trying to track it down, without much luck so far. Anyone out there who could help? Send me an e-mail to webmaster@whonnock.ca or add a comment to this entry please?
Posted by fb at 11:13 No comments:

In 2007 the Pitt Meadows Paddling Club (PMPC)started their programs on the south west shore of the Alouette River at the Harris Road Bridge. Their area of operation is familiar to Slumach students as Lillooet Slough where Bee was killed with a gunshot. To learn more about the Club click pmpc.ca
Note: 29 April 2008. The PMPC added a news item to their site. Click here to read it.
Posted by fb at 17:54 No comments:

p. 35 "By 1880, there was one licenced bar for every thirteen people in New Westminster."

p. 45. "After the union of the two colonies of Vancouver Island and British Columbia in 1886, Native liquor laws were tightened even more. Penalties were increased to a $500 fine for selling. one third of which went to the informer.... Persons possessing alcohol in a Native dwelling could be fined $500 and sentenced to six months in prison for a first for a first offence--or to a year of hard labour for the second offence. Guilty children under the age of sixteen were whipped in private."
Posted by fb at 13:17 No comments: