Click here to find a 50-page book (unfortunately only in German) titled Verfluchtes Gold (Cursed Gold) by Anton Lennartz. Lennartz did the scouting and was the team leader for Mineworks Film's documentary "Der Fluch des Indianergoldes" directed by Frank Mirbach and presented by ZDF. Rob Nicholson provided expert advice for this documentary.

One of Lennartz's references unknown to me is a book by Janusz Piekalkiewicz called Schatzsucher haben noch Chancen, (Treasure Hunters Still Have Chances) published in 1975.
Posted by fb at 10:45 No comments:

Reading the following sentence, in Don Quixote, I couldn't help but think about the legend of Pitt Lake gold.

… a history known to children, acknowledged by youth, celebrated, and even believed by the old, and despite all this, not truer than the miracles of Mohammed. 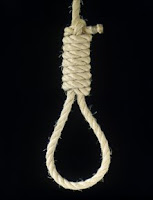 It is suggested that Slumach's hangman also hanged Louis Riel in November 1885. The execution of Louis Riel was done by Jack Henderson but it is not likely that he was the executioner of Slumach. In 1888 Henderson made a mistake and as a consequence he was never permitted to officiate again. Still, the executioner of Slumach, though not the hangman of Riel, may well have had some connection with the Batoche Rebellion.

Robert Hodson was the excutioner in 1885 of nine Crees associated with the Rebellion. Having noticed his expertise he was invited to move to British Columbia a couple of years later....

Information about Henderson and Hodson: Frank W. Anderson, Hanging in Canada, Heritage House, 1982.
Posted by fb at 20:03 No comments: