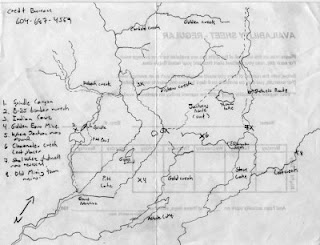 Daryl Friesen drew this map five years ago when he was "bored of work." Said Daryl: "The map shows some little-known locations such as the Shaman Cave up near Vickers Creek as well as the lost placer near Clearwater Creek, a treasure on its own, covered by Charles Miller in The Golden Mountains." Click on the picture for an enlargement.
Posted by fb at 17:07 No comments:

B25 bomber at Spindle Canyon

Daryl Friesen acquired this Historical Record of the RCAF Station Saskatoon" for the period 1 December 1952 to 30 May 1953. He thought that, even if it is not related directly to Pitt Lake gold, it may still be interesting for some of us, and I agree.

The report mentions loss of the loss on 29 January 1953 of the then still missing aircraft. Click on the image for an enlargement.

Mike Boileau's report shows photographs of the wreckage.
Posted by fb at 16:43 No comments:

Pitt Lake may be the next of the great gold fields

Victoria’s Colonist, made available in digital form by UVIC, provides a digest of news from the mainland. Under the above heading, the Colonist of 8 November 1903 reports that Mr. George Moody of New Westminster, described as “…a very trustworthy man, of Indian extraction, but possessed of no wealth in money or chattels,” came back to from Pitt Lake with a “vegetable can full of gold dust” worth $1,200. Secretive about the location of his find he was trying to organize an expedition to return to the find. It is probable, says the dispatch, “…that the next stampede will be to the Pitt Lake district.”

Nothing of that kind happened but the sequel is the archetype of the "Jackson" story in the Colonist of 19 December 1905 telling that “three years ago” an Indian came into New Westminster no less than three times and exchanged gold from Pitt Lake placers for money. This man died from the exposure to the rough elements, but before he died he drew a map for a relative, who, joined by a white man, couldn’t find the placers, whereupon the secret, “no longer of the same value," was "...told to several but without avail.” Two search parties for the "lost placers" were arranged for 1906.

Is it not interesing to find George Moody, the witness in the Slumach trial, at bottom of this story? Nothing about this found in the New Westminster Columbian.
Posted by fb at 10:16 No comments:

On Sunday morning [15 November] Mr. William Moresby, warden of the penitentiary, died after an illness of five days, aged 49 years, of inflammation of the lung. He came to British Columbia by sailing vessel from England in 1861, and joined his father, who was then practicing law in Victoria. In 1863 he went to Cariboo gold hunting. but returned to the Coast and entered the provincial police in 1868 at New Westminster. he continued in this service for twenty-seven years, before being appointed governor of the Westminster jail in 1877, and warden of the penitentiary in June 1895. He leaves a widow and two children. The funeral will take place tomorrow.

Did not survive Slumach by many years. Note his five-year Cariboo gold hunting background. If there was any connection between Slumach and gold Moresby would have known.

The Road to Stu Brown's Gold? 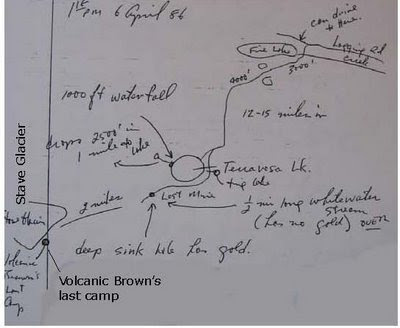 In April of 1986, Stu Brown disclosed in a private conversation with Don Waite the location of his fabulous gold discovery. It is not certain if Stu Brown really gave his secret away, but it seemed plausible enough for Don to sketch the above map from memory immediately after the conversation, just to make sure that he wouldn't forget what Stu Brown had told him.

The map shows the location of a "deep sink hole" that "has gold," two-and-a-half hours walking from the Terrarosa Glacier. The sink hole. according to what Don was told, is visible from the air (yellow in colour). He was also told that going up Sloquet Creek is just too hard. There are reports that the location is covered under some 25 feet of snow most of the year. Late July or early August offer the best chances.

Warning: From everything anybody's ever said, it's pretty dangerous country out there even for experienced hikers and climbers.

Click here and look for "Stu Brown's correspondence" to read his letters about this find. A copy of Don Waite's sketch map and notes are also there.
Posted by fb at 20:05 No comments:

On November 14, 1890, the defence applied for postponement of Slumach's trial until the next assizes on grounds of the absence of "Moody, an Indian" and Florence Reed, two "necessary and material witnesses."

The judge did not object, but the governor of the jail, William Moresby, who had led a fruitless hunt for Slumach at Stave Lake, was not agreeable and promised that he could produce the missing witnesses.

The two witnesses were present when the trial resumed the following day, but they were not called to the stand. Why not? Nothing they said could have saved Slumach from the gallows. Canadian Law dictated that death by hanging was the punishment for all murders, even if the murder was in self defence.

What was behind this "absence" of the witnesses? By rescheduling the trial to the spring assizes, the defence hoped to avoid an undignified death at the gallows. The expectation was that the elderly Slumach would die in prison “from natural causes” before the spring.
Posted by fb at 16:22 No comments:

Courtesy Archives of the Roman Catholic Archdiocese of Vancouver. Click on image for enlargement.
Posted by fb at 17:21 No comments: 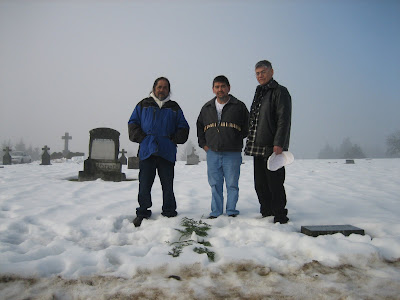 "This has been a long time coming," said Cyril Pierre as we walked up the slope at St. Peter's Cemetery in Sapperton. Finding Slumach's grave has been one of his lifetime goals. With the visit to the grave the process of returning Slumach to the fold of his family and the Katzie has started.

Photo: Saturday, 17 January 2008. Garnet, Willie and Cyril Pierre at Slumach's grave. Click on photo to enlarge.
Posted by fb at 09:23 No comments: 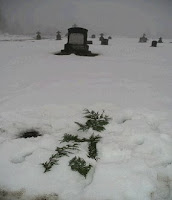 Brian Antonson writes:
At 8:00 a.m., 118 years ago today, January 16 1891, a man recently named "Peter" Slumach died "at the wrong end of a 5-strand rope", hanged in New Westminster's Provincial Gaol (jail), as a capital punishment for the murder of Louis Bee the previous September. He had been known variously as "Slummock", "Slumah", and "Slumach". An hour before he died, he was baptized in the Roman Catholic faith, and given the Christian name "Peter".

He's been a huge part of MY life over the past half-century...and OUR lives, as a result of our various connections.

This morning, Fred and Helmi Braches and I visited his unmarked grave in New Westminster's St. Peter's Cemetery, laid cedar sprigs atop the white blanket of snow that covers it just now, and recognized in our own way his passing. The mists of a foggy January morning hung about the place, the frigid air enveloped us, and we had "a moment" with the spirit of a man with whom OUR lives have become entwined.

Tomorrow, Fred and Helmi will return to the site with members of the Katzie Nation, of whom Slumach was one.

I'm sharing a picture of the site as it was earlier today.
Posted by fb at 17:45 No comments:

Second Meeting of the Lost Mine of Pitt Lake Society 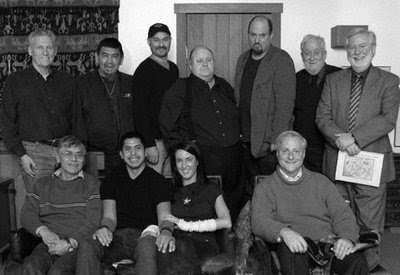 More than 20 years ago Don Waite called the Society's first meeting. This second meeting called by Don was held on Thursday January 8th at the Braches home in Whonnock. The meeting was enriched in particular by the presence of members of the Pierre family, relatives of Slumach, who gave depth and meaning to what was said and thought.

In the photo Brian Antonson is holding a copy of a calendar produced to commemorate the occasion. Click here to look at or download the calendar. For printed copies e-mail: webmaster@whonnock.ca.
Posted by fb at 10:28 No comments:

Stewart Brown's letters are well-known from Rob Nicholson's Web site and publications. Don Waite's collection, recently rediscovered, included a full set of copies of Stu Brown's letters written to the government--copies he received from Stu Brown--and correspondence with Don Waite himself. Don Waite agreed with the posting of the letters on the Slumach Web site and, when asked, Rob Nicholson kindly agreed to go ahead.
The letters are in three different pdf files. Click on the name of the group to open the corresponding pdf file.

Click here to read or download a fascinating story told by Arthur Wellesley ("Dick") Carter published here with kind permission of his son Jim Carter.
Posted by fb at 17:07 No comments:

"Forbidden Treasure: One Man’s Quest for Slumach’s Lost Gold Mine of Pitt Lake" by Mike Boileau is now on the Web as well. Click here to read or download his fascinating stories looking--and finding--gold in the Lost-Creek Valley.
Posted by fb at 17:01 2 comments:

The text of A.W. (Dick) Carter's 1940s transcript of the Jackson letter, the only complete text that seems to have survived,is now posted on the Web site.
Click here to read only the text
Click here to read my commentary and the text.
Posted by fb at 16:51 No comments:

Click here for the last entry on this subject. The archivist of the Roman Catholic Archdiocese of Vancouver will be back to work next week. She promised a transcript of the baptism register of Slumach that should confirm that he was given the first name Peter. In anticipation of a message from the archivist, Archie Miller surprised me a few hours ago with the following transcript in his collection of that entry "from research done some time ago in Catholic records"

This confirms that Slumach was given the name Peter just before he died. Thanks to Archie Miller for sharing this with us.
Posted by fb at 18:14 No comments:

Submissions at the Assizes included records of the preliminary hearings. The whereabouts of the originals of these records are unknown but Duncan McPaden made transcripts that have survived as photocopies in Don Waite's recently recovered collection. These copies are now available on the "Transcripts from Legal Records" page on the Slumach Web site. Click here to open the page or open the individual pdf files by clicking on the descriptions below.