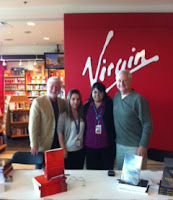 The two Antonson authors were at Virgin Books at the airport today selling and signing books.
They sold 18 books in four hours--not bad! They'll do it again next year!
The picture shows Brian and Rick and bookstore folks.

Teresa Grigg wrote a heart-warming and interesting and above all well-told story that starts: "I grew up with gold fever in my blood. My grandfather Grigg, and his father before him were both dreamers of gold. They spent their life searching for the Lost Mine of Pitt Lake, also known as Slumach's Gold... "
Click here to read it all.
Posted by fb at 20:03 No comments:

In the legend of Slumach's infamous gold, it's written that Slumach was an elderly Katzie First Nation man who lived where the Pitt River flows out of Pitt Lake. Tried and hung for the shooting of a man in New Westminster in 1891, the whereabouts of his widely sought wealth said to be hidden somewhere near Pitt Lake, British Columbia, seemed destined to remain a mystery forever. With her talent for creating characters to truly care about, and her intuitive ability to summon excitement and passion in her readers, Bonny Darby weaves the historical search for Slumach's Gold into her novel. A tale of adventure, mystery, romance, and a hunt for true buried treasure, White Rose Caper provides the unmistakable elements of an engrossing escape.

Join Maggie Garrison, owner of flower shop in British Columbia, as she seeks to recover the key for an antique desk left to her by her grandmother. With her life threatened, she must uncover the secret of what the desk contains and in so doing, is pulled further into a mysterious hunt.  Along the way, she finds herself becoming more entwined in partnership with Jake McAllister, a handsome lawyer with a burning passion for her. Maggie’s friends and family reveal long-kept secrets, as she discovers an inheritance beyond anything she could have imagined. Fast-paced chases, blackmailing villains, family secrets, and a simmering romance propel Maggie into a covert and exciting life that is far-removed from her quiet days in the flower shop.