Spotted at the Sasquatch Inn in Harrison this morning Brian and Adam. Were they just reviewing findings in the area or preparing for an intensive search this coming summer? What did Adam find out that caught Brian’s interest?  Seeing Brian, Sloquet Valley comes to mind. In that case it is strange not to see Rob there as well.  Did they keep Rob out intentionally? It seems that UBC is analyzing an ore sample but Adam remained tight-lipped about the location of his find.

Two types of people still seek the legendary Lost Creek Mine: “Screwballs” and “Reputables.” That is how, in 1951, Carl Agar of what is now Okanagan helicopters classified those asking him for a ride to where the goldmine was supposed to be located.  Just for record, it is Alfred (Fred) Gaspard ... not Albert Gaspard.

On Sunday, Global National’s segment "Your Canada” will include a brief interview with Brian and Rick Antonson talking about Slumach and the search for the legendary gold. Tune in at the 5:30pm Global National newscast. Warning “Your Canada” usually runs closer to 6pm at the end of the program.
Posted by fb at 16:04 No comments:

Donald Waite’s Kwant’stan (the Golden Ears), published in 1972, is a classic and one of the first two books telling stories about Slumach and the search for the legendary Pitt Lake gold.
Recently Len Pettit meticulously scanned Don’s book in high resolution. Click here to download Len’s handiwork.

The second book, published that same year 1972, was Slumach’s Gold by the Antonson brothers and Mary Trainer.
Used copies of the first editions of both books are still offered on the Internet
Posted by fb at 11:34 No comments:

To the land of the golden bullets

Evan and I decided to follow up another golden lead that we have always been interested in as well...And that is the mysterious Legend of the Golden Bullets from Port Douglas...So here we are, a month later from our first expedition and we decided to set off for another week in the mountains, hunting for the Lost Creek Mine...This time, in the remote peaks above Port Douglas, towering above the Lillooet-Nahatlatch divide...The Sasquatch Corridor!
Click here for a full report and fabulous pictures!
Posted by fb at 19:55 No comments: 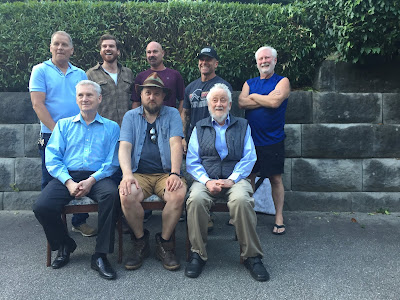 From Daryl Friesen’s treasure trove comes this nice map said to be: "From the new book Slumach’s Gold.” Though perhaps intended to be included, the map was not used for the 1972 issue of the bestseller. Click on the picture to enlarge it. Thanks Daryl!

Having a look at the Wild Duck Inn map 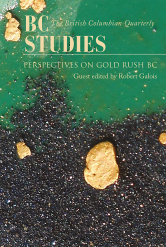 To order go to BC Studies
Posted by fb at 17:09 No comments:

The truth and nothing but the truth?

As always Brian gave a great rendition of Slumach’s legend to an appreciative audience. Don (r) and Fred (l) tried to keep Brian honest — really not that easy.
Posted by fb at 18:47 No comments: 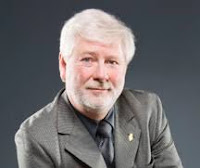 On Tuesday, February 13th, starting at 10 am, Brian Antonson is presenting an updated version of the story of Slumach’s gold.
Location: Abbotsford Recreation Centre (Senior Activity Centre), 2499 McMillan Road, at the corner of Old Yale.
Everyone welcome. You don’t have to be a senior to attend. Brian is an excellent presenter and his talk is well worth the entry fee of $7.00.
Click here for more information about Brian’s and other Learning Plus classes.
Posted by fb at 20:26 No comments: 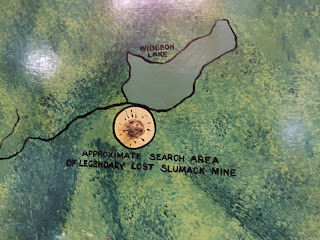 Correction July 2021: North is to the right -- south to the left. The location of the "mine" is east of Widgeon Creek.
What happened to the large map of Pitt River and Pitt Lake mounted on the wall behind the bar in Port Coquitlam's Wild Duck Inn? Some thought that it had been painted on a wall and was  therefore lost but a an article with a photo showing the framed map up mentioned that it and other items were up for sale in 2000.
The map was NOT painted on a wall but on sheets of fibreboard and we now know that it was purchased at the final auction at the Wild Duck Inn by of a long-time frequent visitor to the pub -- now a resident of Whonnock. As the attached pictures show the map is in excellent condition. Space did not allow taking a frontal picture of the entire map -- that has to wait until this summer.
According to the present owner the map was hidden behind behind some other images in the last year.  Click on images to enlarge. 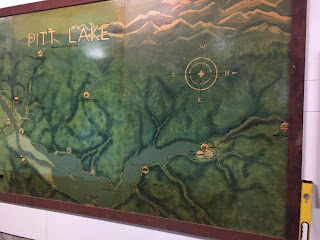 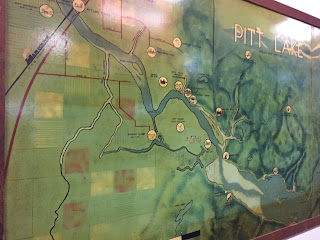